A Boost for Your Wood Stove

When I was a boy I recall very vividly my grandparent's farm house. It was a large expanse of a thing with many rooms, layed out in the typical fashion of having the bedrooms upstairs and the living quarters on the main level. The basement was a very scary root cellar for which I did not care. A city kid can only cope with so much. It was built in the early 1800's on prime PEI soil that my great, great, great grandfather cleared. The house still stands today.

One design feature that was very common in those homes built before central heating was a simple grate that passed through to the upper floors right above the kitchen wood stove. This simple device allowed heat to pass from the warm kitchen below and rise to the upper floor. There was no duct work involved at all. You could look straight through the unit and see the other side clearly. It also made for some good spying for a little boy to pass a rainy day on the farm.

Fast forward thirty-plus years to when I was finishing the basement in my own house. As a primary heat source the wood stove in the basement was just what was needed. Wood remains the least expensive way to heat a home, not to mention that the fuel is renewable and stays on when the power goes out. One issue bothered me though. There was enough heat coming off of that stove to heat two houses but much of the heat was staying in the basement level. Having this large area as a finished family room wasn't going to work if it was going to be 30 plus degrees down there, not to mention that I could heat the whole house much more efficiently if there was a means to get that heat upstairs. I couldn't help but think of the grate at my grandparents house, so I went on a hunt for such a thing.

In a country with roughly one million wood stoves (Stats Can), mostly in the basements of homes, you'd think that the old farmhouse grate would've survived into modernity. Wrong. Sure, one could custom build a duct and affix a floor grate to the top and a ceiling grate to the bottom, but I wanted an off-the-shelf solution. Preferably with a fan. None to be found. Called ventilation shops all over town and they hadn't heard of such a thing. So I gave up. Until...

I was reading a trade magazine and low and behold, there it was. A fan to move air from one level to another and it was enclosed in a telescoping duct designed to fit between floor joists. I called the company for the local distributor, had them order it for me and voila! Its now installed. 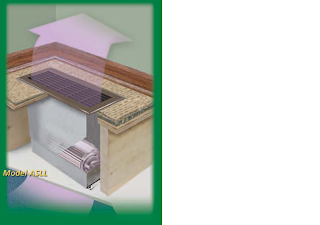 The results? The fan does two main things. First, it equalizes the temperature between the two levels in both winter and summer. Meaning that it both warms the air upstairs with heat from the wood stove in the heating season and it also brings the cool summertime air from the basement upstairs too. Its a dandy little rig.

For those looking to make this a DIY project, make sure you have decent skills. It took me a full morning to install the unit and there is a cut that needs to be made in both your downstairs ceiling and upstairs floor. The reason I'm bringing this to you all is not as a DIY tutorial. Its that I believe that more homes should have one of these units for the benefits listed above.  Even I had trouble locating an off-the-shelf solution and I do this stuff for a living.

If you are building a new home or doing a renovation and you have a wood stove, consider this unit. Its worth the investment.
Posted by Glen Creamer at 9:14 AM